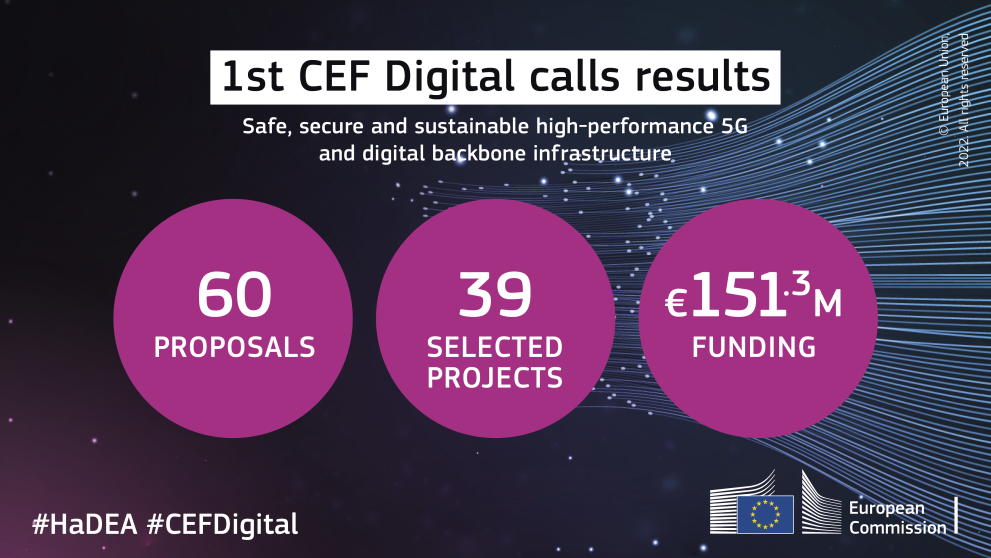 The EU reaffirms confidence in Medusa with a grant

Dublin, 10th January 2023. Medusa, the submarine fibre optic cable system that will have a total length of 8,700 km, is a strategic project to improve connectivity between the countries of the European Union. For this reason, the EU Commission has granted the ATMED-DG (Atlantic-Mediterranean Data Gateway) project €7,79 million to finance the deployment of a fibre pair between Lisbon, Zahara de los Atunes, Barcelona, Marseille and Mazara del Vallo. The ATMED-DG project corresponds to the Western Mediterranean cable section (3,889 km) and will be the first cable to connect landing stations in Portugal, Spain, France and Italy on the same submarine cable infrastructure.
The project has been granted under the call Backbone connectivity for Digital Global Gateways (CEF-DIG-2021-GATEWAYS).

The grant is in addition to the €40 million also awarded by the European Commission through the European Investment Bank (EIB) to secure direct high-speed connectivity in particular between the research and education communities and users in the North African countries and the EU.

The ATMED-DG project is part of the CEF (Connecting Europe Facility) programme to support the implementation of strategic networks to improve the connectivity of EU countries. In this sense, it should be noted that the current state of the submarine connections in the Mediterranean region presents some conditions and deficiencies that Medusa will be able to solve.

Specifically, the current global cables that connect Europe with Asia and the Middle East and that have their terminations in Marseilles and Sicily (stations with the highest concentration of subsea cable in the West Mediterranean region), are very long cables with a rather limited number of fibre optic pairs for technical or commercial reasons. In addition, some of those cables are reaching the end of their useful life.

Faced with the new scenario of increased demand for data traffic driven by cloud-based services, the rise of video streaming services and social networks, the need for a submarine cable system such as Medusa, which will provide greater coverage to the entire Mediterranean region with a robust and high-capacity network, is evident.

The entire Medusa submarine cable system, which will come into operation in 2024 with the Lisbon-Barcelona-Marseille section, will have a data transmission capacity with segments with up to 24 fibre pairs with a capacity of 20 Tbit/s per fibre pair. The system will connect the two shores of the Mediterranean and provide access to telecommunication infrastructure that is crucial for developing the digital ecosystem of populations in North African countries, as well as six EU member states (Portugal, Spain, France, Italy, Greece, and Cyprus). The investment is expected to have positive impacts on the economy of these countries, which will lead to inclusive and sustainable economic growth.

ATMED-DG, digital gateway between the Mediterranean and the Atlantic

One of the major stumbling blocks encountered so far by Mediterranean submarine fibre optic cables that want to connect to the Atlantic is the Strait of Gibraltar. The maritime traffic and its geological and geomorphological complications increase the cost and technical difficulty. Medusa’s ATMED-DG represents a great improvement, as it proposes an innovative link using the gas pipeline that connects Zahara de los Atunes and Torreguadiaro, on the south of Spain.

As Norman Albi, CEO of Medusa, says: “The Medusa ATMED-DG section will open up the Mediterranean to the Atlantic and will be an important precedent for future submarine cables. For this reason, we are convinced that Medusa will represent a qualitative leap in the connectivity of the EU countries“.